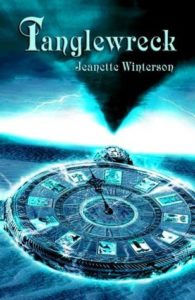 I am reading books from the library written for tweens, and so I picked up this book because I like fantasy.

Silver is a plucky 11-year-old whose parents and sister vanished four years ago. She’s being cared for by a selfish mean woman in the family mansion, Tanglewreck, one of those old English manor houses with a lot of mysteries to it.

A lot of strange disturbances start happening. A wooly mammoth shows up on the banks of the Thames. A school bus full of children vanishes. Time seems to be going backwards and forwards. People are afraid. Something is clearly not right.

When a mysterious alchemist invites Silver and her guardian to his house in London, she finds that he believes she is the person spoken of in a prophecy about a missing clock with power over time itself. He wants her to find the clock–and then hand it over to him. A lot of unexpected plot twists later, I can definitely say the author clearly is having a lot of fun with multiverse theory and quantum physics paradoxes, including Schroedinger’s Cat.

I enjoyed many things about this story, especially the occasionally amusing bad guys and the heroine’s character journey.

However, I don’t recommend that a Christian parent let their child read it without also having the parent read it and discuss it. While it’s quite possible to be a science booster and a Christian, this author isn’t. For example, the author attributes some evil actions and motives to a former pope or two (and leaves it at that, putting them on the side of the bad guys) and imbues objects, like a house and a clock, with powers that sound to me like they belong to divinity. I do wonder where the author thinks the prophecy about the heroine comes from. I guess it’s a random prophecy.

For a Christian family, it’s probably too much.