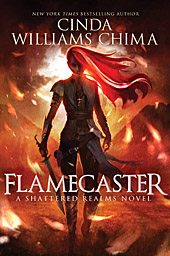 This young adult author writes for the general market, not the Christian market. Since I love her work, I decided to review it here, with some caveats below for Christian parents.

Ash, age 16, is son of the Queen of the Fells and her wizard husband. (The Fells is a Queendom, not a kingdom.) Being male, he’ll never be in line for the throne. Ash has magical powers like his father, and finds himself called to be a healer, rather than a warrior.

When his father is murdered, Ash runs away to a school far away that has colleges for wizards, warriors, healers, and so on. It’s safe there–for a while. When things heat up for him there, he embarks on a quest to kill the evil king of the neighboring realm of Arden, the one who is responsible for his father’s death.

Meanwhile, a girl named Jenna lives as an oppressed miner in Arden, disguising herself as a boy. She has gifts of a seer, not a wizard, and a mysterious mark on the back of her neck.

When the empress from across the sea sends emissaries looking for her, things get bad for her very quickly. She ends up needing healing that only Ash can provide.

The book continues on to a surprising ending. It’s a series of four books, and of course I’m going to read number two next! I find this book, and the previous series, to be tales I can’t put down.

The author mentions the Maker from time to time, an apparent reference to God, so Ms. Chima’s world has a creator. Good guy characters have a moral compass. The protagonist’s desire to murder the king doesn’t pan out. There’s no moral ambiguity, at least none that lasts very long. However, there is a (non-explicit) sex scene involving unmarried teenagers.