Sons of God by Rebecca Ellen Kurtz, a Review

Genre: Christian horror. Think of Twilight, the Mummy movies or Indiana Jones, full of paranormal activity. But this one has a Biblical worldview. Also, it’s not for kids.

This novel doesn’t really fit with others I have reviewed. It’s not fantasy or science fiction. In fact, it’s at heart a romance. It describes plenty of violence, so much that I am glad it’s not a movie.

It does fit in with some others I have reviewed in that it is self-published and could use some editing. Kurtz is an amateur archeologist, not a professional writer. Occasionally she “tells” rather than “shows” action–mostly in these gory situations where I didn’t want to hear the details anyway. She also jumps around with her point of view from one character to another in an unsettling way, something a good editor would have changed. Dialogue is occasionally clunky and often too modern.

However, given the fact that the publishing industry pretty much shuts out unknown authors in this genre, I am often willing to check out self-published novels and look past the rough edges.

What I found was a wild tale of the paranormal: demons and immortal half-angels (some with vampire characteristics) sharing the earth with the rest of us, who are mostly unaware of them.

The protagonist of the book, Rachaev, is an immortal Nephilim (a halfbreed race, offspring of fallen angels and humans who mated at the dawn of time). Although her parents had chosen the evil path, she has chosen to follow Elohim (God). She is in a spiritually dry spell, lasting 2,500 years. At first she blames God, but she eventually figures out isn’t God’s fault.

There’s a love interest for Rachaev; after all this time she finally has found a man who interests her. However, it is forbidden for her to wed a human. How is this resolved? And how is she able to finally do what Elohim has commanded her to do (kill her evil, bloodthirsty mother, Ishtar)?

This book is for adults, because of the violence and the sexual tension (no sex scenes — the emphasis for Raechev is purity). If it were a movie, it would probably be rated somewhere between PG-13 and R.

The book is not only a story. It also contains translations of ancient manuscripts including the Bible, interpreting them to show that Nephilim, half-angel, half-human, are talked about in a variety of texts from around the world. I am not sure what to make of this. Is she arguing that Nephilim really exist? If so, this argument is muddying the waters–what she is selling is a tale, not a history.

It’s a gripping story, hard to put down once you get into it. The best thing about it is its rock-solid affirmation of the existence of God and his control of all things, and of his mercy–in providing eventual happiness for Raechev despite her long disobedience.–Phyllis Wheeler

This month’s Christian Science Fiction/Fantasy (CSFF) Blog Tour involves a number of bloggers writing about the novel Blaggard’s Moon by George Bryan Polivka. Here’s what some of them are saying:

Chawna Schroeder is concerned that the story doesn’t have a proper hero, one that the reader can bond with. Delaney is the story teller, and is off center stage for most of the book. Damrick functions as the hero, performing daring deeds, but he’s got clay feet–we can see his motivations of “self-preservation, anger, mercilessness, and vengeance-type attitudes.” Then Jenta, the heroine, is “driven by the story rather than driving it.”

(In short, it’s a story about sinners. But I agree, we readers don’t get that close to Damrick.)

On this topic, Rachel Starr Thompson says she thinks the distance gives Damrick and Jenta a mythic quality.

Chawna identifies two themes:
* reaping what you sow, and
* learning to live so as to die without regrets. (I would reword this as learning to change for the better.)
The resulting tale, balancing these two, is a dark one, she finds. (I agree that this book has many dark moments. )

Rachel Starr Thompson comments on the sadness aspect too. She finds it “a lament for a world gone wrong, for a world where good people can suffer while evil men prosper. It’s the lament of Ecclesiastes and Job and some of the Psalms, and like them it asks us to find hope in the goodness of God while never asking us to pretend that hope negates the sadness.” (Well said, I say.)

Personally, I like a book whose characters learn to lean on Jesus, so to speak. I don’t see that happening in this book overtly. But as they shift, learning to make right choices no matter what the consequence, a Christian can identify the work of the Holy Spirit.

Others have mentioned that they find this book to be in some other genre besides fantasy. It’s a sea tale set in another land. There’s no magic. It has a very historical air to it, with myriad details.

So, read this book! Tell me what you think! 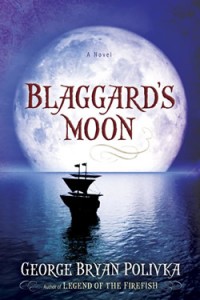 Both tales take place in a fantasy world called Nearing Vast, where the law-abiding citizens are in the grip of ruthless pirates. The shipping companies pay off the pirates, and the pirates pay off the Navy, which doesn’t enforce the law.

Into this situation comes Damrick Fellows, a former seaman who dares to challenge the pirates. Damrick’s tale tells his story and that of Jenta, the woman Damrick loves.

The book contains some very memorable and finely drawn characters: not only Damrick and Jenta, but the king of the pirates, Conch Imbry. Their interactions form a tale of heroic deeds, not the least of which is Delaney’s decision to save the girl.

The book is lyrically written, bringing a song to my heart as I read parts of it. However, there is also plenty of violence in the book, briefly described. While not for younger children, it’s appropriate for teens–there are no sex scenes in it. Personally I am not fond of reading about violence though.

The Christian faith is evident–there are priests and crosses. At least one character, a drunk, begins to pray and is changed. Delaney’s heart too changes as he sits on the post and reviews his life. My heart yearns for more obvious response from God in the tale, though.

This book is really about the complexities of the human heart, and how it is capable of changing for the better. It has a nice solid moral groundwork, memorable characters, and a literary flair. For lovers of action, this is a great book.

Unfortunately, the market for new writers in this genre has been soft, shall we say. But Tolkien and C.S. Lewis continue to get a lot of attention, so we know there’s interest! So let me tell you about the work of a very talented writer.

George Bryan Polivka’s pirate novel Blaggard’s Moon is actually a prequel to the Trophy Chase Trilogy. All these take place in the land (or waters) of Nearing Vast. The first of these three books is The Legend of the Firefish (which our local library has bought at my request). The third one is The Battle for Vast Dominion, which has garnered a Christy Award nomination.

So this brings us to Blaggard’s Moon. For those who like me haven’t read The Trophy Chase Trilogy yet, this is apparently a great place to start in learning about Nearing Vast.

Tomorrow I’ll give you my review of Blaggard’s Moon.

The home page says,
“Welcome, weary traveler, to the Kingdom of Nearing Vast! ”
I like the design a lot. It’s clearly made by someone who knows what he or
she is doing.

On the home page, one of the trilogy’s characters, Cap Hillis, speaks to the reader as if the reader is a tourist and provides a list of entities to beware of, including pirates and firefish. This is pretty cool. It gives you a good idea of the general lawlessness of the place, and also the idea that in this world, nightmarish monsters can be real. In addition, it gives you a taste of the colorful characters that fill Polivka’s books.

If we click on “Cap’s Pub,” we come over to a blog where most of the entries are in the voice of Cap, but a few are in the author’s voice. Unfortunately the blog entries ended last September. I guess Polivka got busy with other stuff, like writing and promoting Blaggard’s Moon.

“Rumors” takes us to a set of quotes from happy reviewers of his books.

“Captain’s Log” takes us to a record of book signings, with pictures.

The “Vast Encyclopedia” takes us to a compendium of lore from Nearing Vast, concerning fishing, sailing, pirates, prophecies, and so on. So, what do YOU think?

With the story of heroics in response to piracy in the news, it’s interesting that our next Blog Tour review will be a fantasy book about pirates. This is Blaggard’s Moon by George Bryan Polivka, and I’ll tell you all about it starting Monday.

What’s your favorite fantasy book? Why?

Reply in the “comments” section. Tell me what I should be reading next, and why.

You haven’t heard from me because I’m pretty busy, and I do have several books to read. I’m very happy to have these in the hopper. Right now I’m reading Blaggard’s Moon, a fantasy pirate story. Or group of stories actually. Stay tuned!