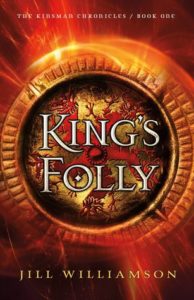 Two sons of the king, Prince Wilek and his younger brother Prince Trevn, struggle against the forces who have corrupted their father. Intrigues at court turn deadly, and Wilek must solve a murder: who did it and why? Meanwhile, natural disasters are becoming commonplace, and Wilek is tasked to travel to a ruined city and report back. The quest leads him on a dangerous journey to nearby realms. Could it be that an ancient prophecy of total disaster is near to fulfillment?

I am so glad Jill has returned to writing about this story world. I really enjoyed this book and could hardly put it down. It’s a sprawling tale, with lots of point-of-view characters. So my only complaint is that I had some trouble keeping them all straight in my mind. Despite that, I highly recommend this book and look forward to the coming ones in the series. 4.5 stars.