I rarely re-read books. But the blog tour I partake in, Christian Science Fiction/Fantasy (CSFF), is currently looking at a book I reviewed last year. Should I just recycle the old review?

I picked up the book, couldn’t remember exactly what the plot was, and read the first page. Then the second. And … I couldn’t help myself, though my time for reading is limited. I dove right in.

I loved this book the first time around. I wondered: would I love it the second time around too?

The answer is: yes! Fans of Christian supernatural fiction will surely agree with me that this book is strongly plotted, has a memorable premise, has unforgettable characters, and strengthens the reader’s faith walk. Not only that, but Dittemore crafts some beautiful prose.

Here’s my review from last time, in case you want more details: http://www.phylliswheeler.com/angel-eyes-by-shannon-dittemore-a-review/ 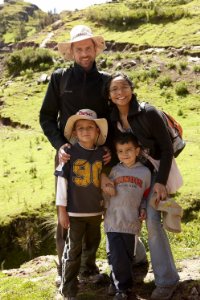 The Roth family in Peru

I was intrigued by the wonderful book I reviewed yesterday, Rumi and the Savage Mountain by Bradley Roth. Its protagonist is a boy who lives in a village in the Andes mountains, and it’s very convincingly told. In addition, it has plenty of what looks like magical realism to me, a genre invented by South American writers. So how did such a book come to be written by a gringo with a name like Bradley Roth? So I asked him some questions:

1. Have you heard of magical realism? If so do you consider this book to be in this genre?

Yes, I have heard of magical realism. Gabriel Garcia Marquez and Isabel Allende come to mind. My experience with Marquez or Allende is that their magical realism uses the absurd to pique our moral imagination. My writing is set in the mythical Andes, drawing from authentic Andean myths and legends, though modified a bit to fit in a few things, like the faith of Tayta Siwar or the story about Junior’s dad. It’s a different way of looking at the world, but it’s not intentionally absurd as I see magical realism being.

2. Do you envision adults reading your book as well as kids?

3. How were you able to get into the head of someone who lives such a different life from that of the average American?

Great question. We recently returned from a year of missionary service with Eastern Mennonite Missions in the Cuzco, Peru. We were based in the city, but as part of our work we travelled out to extremely rural villages. We got a taste of what life was like in the mountains. During our time in Cuzco, we also studied Quechua. A few Quechua words pop up in the story. And I’m interested in Andean culture, folk beliefs, and history.

If you’re interested, you can read more about our journey in Peru at www.Facebook.com/rothsinperu

I would also add that the voice of the characters is intentionally a bit anachronistic. Rumi, Kiya, and Junior talk a little like kids in 21st century US.

It could be Peru, or any place in the Andes. It’s my imagining of life shortly after the Inca Empire was overthrown by the Spaniards–except that creatures out of myth are alive and well and walking about. And there’s a bit of alternative history woven into the background: the Lamb was born into the Andes, and the faith centered in his life and way is embodied by the Taytas.

I like fantasy and sci-fi that takes questions of faith seriously. There’s scant little of it. I read Narnia when I was a kid. Ursula LeGuinn’s Earthsea series and Mary Doria Russell’s Sparrow and Children of God books strike me. I would like to find compelling fantasy that takes Christian nonviolence seriously. I’m working on that.

Rumi is an 11-year-old boy who lives in the Andes mountains. His main worries are dealing with the local bully and caring for his younger sisters while his mother is at work in the fields. Suddenly a strange messenger appears and convinces him that Rumi’s beloved friend, the village holy man, will die unless Rumi brings some snow from the snowcap of the nearby mountain. The messenger from the Most High leaves him with a few odd items to help in the journey: a feather, a grain of quinoa, a clay whistle, and a potato. Is this all a joke, or should he go?

Rumi’s faithful dog, Junior, can talk and advise, like a human friend. What if the holy man dies? The two of them decide to go. And so begins an adventure filled with perils.

This story, intended for youngsters, is very readable for adults as well. It reminds me strongly of the magical realism work of South American authors. Magical realism matter-of-factly describes events that are actually bizarre or impossible, but the characters accept them as if they are normal. This tale is full of instances of this, starting with the talking dog.

What makes this book so cool is that it is convincingly told from the point of view of Rumi, the boy. This child leads a subsistence lifestyle very unlike that of the average American kid, and he’s facing all kinds of tangible supernatural forces. Yet his story is believable because he shows us his emotions in each situation. It doesn’t hurt that Roth uses rich metaphors as he weaves the story. While the book is self-published, it’s free of errors, making it a joy to read.

There’s a great faith lesson in this book when Rumi refuses to worship something that is not God, providing great fodder for a family discussion. In short, read this book. I expect you’ll love it too.

Read my interview with Brad Roth.