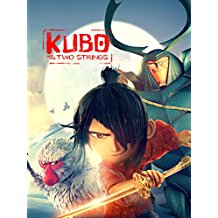 I’d heard this anime-style tale praised by some in the industry, so I decided to watch it. My takeaway: for Christian family viewing, don’t let your children watch it without a discussion from you about the various non-Christian elements in the story. For example: identifying ancestor worship as a substitute for knowing and loving the real God.

Kubo’s story is a hero tale, where a boy and two companions–a magical monkey and a human/cockroach–go on a quest to retrieve some charmed armor that is supposed to protect the boy from the awful sorcerer witches who are out to kill him. It doesn’t help that the witches are his aunts, and they’ve just killed his mother. His father vanished when he was very small.

There’s a lot of magicking going on: On the part of the boy (who uses origami magic to tell stories). On the part of the terrifying aunts, who throw bolts of energy around and destroy the village where the boy’s friends live. On the part of his dying mother, who is somehow able to bring the boy’s monkey figurine to life. But not everyone can do magic. The villagers apparently can’t.

There’s ancestor worship. As if they are deities, the ghosts of ancestors appear to loving families in the village, bring peace, give blessing, and then go away. Puzzling to a Christian child, surely.

The quest is for magical armor to protect Kubo from his aunts. On the quest, the nagging monkey and the ditsy cockroach-guy do their committed best to help and protect Kubo, at total risk to their own lives.

Finally, in a big battle, the two protectors succumb. His evil aunts reveal that the monkey was in fact the spirit of his mother, and the cockroach a transformed version of his father. No wonder the monkey and cockroach were so endearing with Kubo and with each other. But now, with no helpers, what can Kubo do?

The magic armor doesn’t seem to be helping, so he throws it away. Kubo decides to use love instead. He strings his magical banjo with two strings he’d never thought to use before: from bracelets he has made of the hair of each of his loving parents. Behold, the blast of magical force from these two strings dispatches the evil aunts and also the evil grandfather. Love conquers.

Kubo has, by himself, saved the day for him and his village. But he is lonely. Soon the ghosts of his parents appear and seem to comfort him. And then the real person of his grandfather shows up. Instead of an evil monster, he’s now just a forgetful old guy who can’t see very well.

I found this ending puzzling. What is evil according to the writers of this tale? Something that morphs into harmlessness? I know Eastern religions think good and evil are two sides of the same coin, not really different from each other. Perhaps that is the point of this. A good thing to discuss with your kid. Is evil real? How do we know?