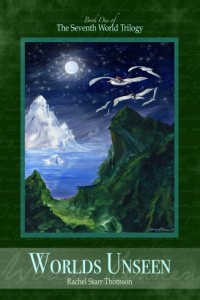 Worldview: Christian. A moral universe with good and evil elements, and a benevolent deity/king glimpsed afar off.

Rachel Starr Thomson is a homeschool graduate who is becoming a serious writer. Her fantasy trilogy, the Seventh World Trilogy, begins with this book. The second installment, Burning Light, has just been published.

Maggie Sheffield lives in a dark medieval world which is like our world in many ways, but dreadfully twisted. It is dominated by an evil empire which has all but stamped out the memory of better times, which included a benevolent supernatural king who left when people turned their backs on him. A prophecy says he will return one day.

The story opens with teenager Maggie, an orphan, whose foster parents are murdered. She goes to live with another foster parent. All three were members of a Council for Exploration into Worlds Unseen that had dabbled in the occult 40 years before and then split up.

As the story unfolds, Maggie agrees to carry an enemy scroll across Europe to another former Council member. On this journey she meets a large cast of others: a gypsy boy who can talk to animals, a blind seer, a witch, a princess, a man who is tempted to join the dark side, and someone she falls in love with. Maggie learns she is capable of heroic deeds.

The struggle culminates in an enormous battle, when the heavens open and supernatural forces come to fight alongside humans in a revolution in eastern Europe. Maggie’s love interest dies. Many questions are left unresolved for the next book in the series.

Thomson has a great imagination, full of a variety of characters. She is able to tell a rousing good story. This book does have a certain unfinished quality to it, because of the self-publishing and consequent lack of tight editing. For example, Maggie’s falling in love isn’t described in a convincing way. But this is a small drawback. I enjoyed this book as well as its sequel, Burning Light. —Phyllis Wheeler

If you would like to buy this book, consider buying it here to help pay the costs of running this blog.

2 thoughts on “Worlds Unseen by Rachel Starr Thomson, a Review”