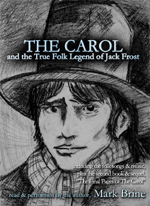 This is a most unusual offering. The author is a musician, not a polished writer. His tale is about a song— a Christmas carol, and also about its composer, a sprite. The sound track contains a lot more than just Mark Brine telling the tale. It is spiced with a number of original songs, performed not only by Brine singing and playing the guitar, but by other musicians as well, including some memorable fiddle music.

Brine’s singing is “old-style” country music, which isn’t getting much play these days. I hadn’t heard it for a long time, and at first it sounded strange to me. But I got used to it as the hours went by that were necessary to listen to this work. It turns out that Brine is a “somebody” in the old-style country music world.

The homespun story is about Jack Frost, whom God created just before Jesus was born as one of several “herald angels.” These heralds were to make music to celebrate the birth of Jesus. This Jack does. But then, instead of living in heaven, as most of the angels seem to do, Jack decides to live on earth. He’s trying to get away from the other angels, who are not treating him nicely because he is small and clumsy. He also has a mission: to make his carol, composed for the birth of Jesus, known to men around the world. This mission is something he assigned to himself, thinking it would glorify God. Jack is also an angel of winter wind, and so where he goes, there is cold.

We learn the story of Jack through the voice of the narrator, who tells us in the first person how he, the narrator, was hit by a car, died and went to heaven (where he was invisible), and was there given the assignment by God to shadow little Jack unseen. (Jack is invisible to regular living humans, too.) The narrator faithfully shadows Jack for nearly 2,000 years, until it is close to the present time. During these travels, Jack is the wind whistling his carol to musicians whenever he can find them, trying to get them to hear the tune and play music with him. Occasionally he succeeds. But his major goal of having everyone know the carol remains out of reach. And he never really figures out that he has a shadow, although once the shadow has left, he knows something is missing.

How does the narrator return to this world to tell us the story? Does the carol become known? What does Jack eventually learn about setting his own goals (as opposed to accepting God’s goals for him)? All these are answered in the story.

Jack’s character is consistent. He’s impatient, impetuous, and can’t concentrate on more than one thing at a time, except for hyperfocusing on his mission– trying to whistle the carol for musicians whenever possible. So in much of the story, he is not only the protagonist but the bumbling antagonist, doing things that mess up his plans and those of others.

This story moves slowly. Jack does a lot of agonizing over decisions. It’s definitely not a high-action tale. And because of the slowness of the telling, it won’t appeal to children, although there is nothing in it that is objectionable.

It’s an unsophisticated story. Brine speaks in a folksy manner, full of unusual idioms. This is definitely what you don’t find in other audio books, which are well-scrubbed grammatically in their initial versions as printed books. I like the down-home country flavor in this offering.

But I found it strange that, in this version of heaven, the angels can be mean to each other. Aren’t angels “unfallen”? Well, on further reflection, there ARE plenty of fallen angels. So I decided not to object to this part of the story, which is after all Mark Brine’s version of heaven anyway, not the real thing. In this heaven, the angels can pair off and have families. Somehow that’s not how I ever envisioned heaven to be.

I did enjoy the story and especially the music. Jack and the author tell us some truths for our busy lives. With the music, it’s an unforgettable experience to hear this book. If you are open to old-style country music (such as the O Brother Where Art Thou sound track), you will also enjoy this audio book.

I’ve been quiet for a while now. Wondering why? I went to New York City with our church youth group on a mission trip for 10 days. Now I’m back, and trying to figure out which thing needs to be done first.

Just wanted to let you know that I listened to an audio book while on the road. I’m not ready to report on it yet. This audio book is unusual in that you can’t buy it in print–it’s only published as an audio. Also, it has plenty of original folksy music in it.