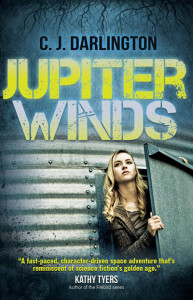 Grey, 17, and her 14-year-old sister are orphans under the loose care of a neighbor. They live in a post-nuclear-war desolate America that is ruled by a tyrannical middle eastern regime.

Grey and Rin live on the fringe, smuggling books and cigarettes across a border to eke out a bare living. It’s been five years since their parents failed to come home from a trip. Grey has had to comfort and encourage her small sister, while needing comfort and encouragement herself.

The government sends drones to capture her. Does she run for home and hideout and endanger her sister? Or does she allow herself to be captured?

You guessed it. She allows herself to be captured, setting off a race in space to the planet Jupiter where the tyrants use her as bait to trap her father, who is still alive. Can she escape?

I found this book to be quite a page-turner. It features strong, unique, and heroic characters and a well-developed faith element. Check it out!

I received this book for free from the author in exchange for my honest review.