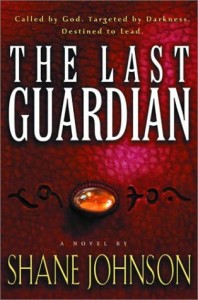 I can see that this is a book a lot of people are going to like. A reader suggested it, so I checked it out of the library. (!)

The problem is that I can’t stand suspense. I’m not a Hitchcock fan, or anything like that. So I kept putting the book down when the suspense level got too much for me. Finally I decided not to finish it.

There were fated to be 12 guardians of a holy object, who one after the other guard it until they are able to pass it off to the next guardian. Finally the eleventh guardian doesn’t find a successor. An unseen hand lifts the relic from his grasp before he dies at the hands of enemies.

Soon afterward, the Word of the Lord brings megadisaster on the planet, which writhes in pain, water, and mud. Most everyone and everything dies. Creatures are entombed, fossil beds laid down. (Noah we presume is somewhere on the other side of the world, saving remants.)

So, I dare you! Check it out! Don’t be a wimp like me. And tell me if you liked it!–Phyllis Wheeler

1 thought on “The Last Guardian by Shane Johnson, A Partial Review”