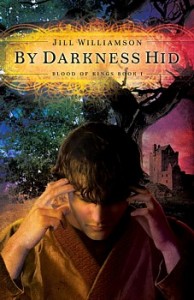 By Darkness Hid by Jill Williamson, a Review
Book 1 in the Blood of Kings series
Published 2009 by Marcher Lord Press, 490 pages
Genre: Christian fantasy, suitable for teens and adults

The kingdom of Er’Rets is pretty hard on its orphans. It calls them “strays” and beats them up. So Achan grows up a stray in the household of a minor nobleman, picked on and beaten regularly. The nobleman, Lord Nathak, makes sure he takes a red herbal potion drink every day. But one day, Achan doesn’t take the drink. Then he hears voices in his head, and is mightily puzzled. He figures out how to hold the voices at bay: think of his favorite refuge, the shade of a huge tree.

Achan’s household is fostering the spoiled brat who will be king–an orphan about Achan’s age. The prince intends to marry a young woman, Vrell, daughter of the duchess of the northern part of the kingdom, for political reasons.

Vrell, though, will have none of it. In fact, she puts on the clothing of a boy and goes into hiding. Circumstances bring her to the same city where the prince is to be crowned; the prince has chosen Achan as his bodyguard, so Achan goes too. We discover that both Achan and Vrell are able to communicate telepathically, a gift given to few. Disguised as a boy herbalist, Vrell tends Achan’s battle wounds. Making friends with him, she teaches Achan to control and use his “bloodvoicing” telepathic gifts.

In this city, some startling news comes to light, and Achan’s circumstances change forever. I’ll let you read the book to find out more.

Vrell is a very engaging character, full of courage and pep. Because of her, I was happy to dive into this story and stay engaged. Achan deals well with his awful circumstances, although occasionally his reactions are too noble to feel true–for example, rescuing an ungrateful person from some bullies, and rescuing the ungrateful prince from attackers. The fantasy world is well drawn; I can easily enter in. Although by the end of the book much is revealed, plenty of mysteries remain, such as why exactly half the country is covered in darkness, and why exactly half of Lord Nathak’s face is withered and under a mask.

It’s a Christian book, clearly; Achan is raised praying to an idol, but he learns to recognize that the one true God speaks to him in his thoughts. Vrell is already one of the relatively few followers of this one God, and Achan is becoming one.

This book was very hard to put down. In fact, I didn’t! I read it all the way through on a Sunday afternoon and evening. It’s quite a page turner. It’s a wonderful book, one that is sure to draw readers into the Christian fantasy genre.–Phyllis Wheeler

This post is part of the Christian Science Fiction/Fantasy Blog Tour, meaning a number of other bloggers are writing about this book too during the next three days. Please take a moment to check out what they are saying too~

AND last but not least, the author’s blog: http://jillwilliamson.wordpress.com/

8 thoughts on “By Darkness Hid by Jill Williamson, a Review”