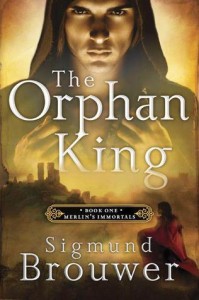 It’s England, AD 1312. Thomas is a slave, an 18-year-old orphan raised by cruel, selfish monks. Thomas knows he has a destiny, some of it revealed to him at age 10 as his mother lay dying. He knows he’s destined to rule a kingdom that a usurper took from his family. And he’s determined to bring justice. But how can he do it by himself? He’s just an orphan with no family, no tribe, no helpers, and no faith.

He puzzles over the mysterious words his mother spoke: “My prayer was to watch you grow into a man and become one of us, one of the Immortals.” And then she died. What did she mean?

Thomas in his quest picks up some unreliable companions: a thief, a deaf-mute woman, and a former Knight Templar. Secrets abound. There are bad guys about, and good guys too. Whom can he trust? Anyone?

It’s a middle grade story, meaning it’s briefly told. I’d love more description and so on, but for the intended reader, it’s a good book, not too long. The characters are well sketched and consistent, and the settings are detailed enough to be visualized. There’s a good story arc , and there is a faith element in the book which I expect to get stronger in the sequels as Thomas learns more about God. In short, it’s a very good book for middle grade readers. It even mentions Merlin and King Arthur, topics which I hope come to the fore in the next books.

As it happens, this book has a lot of loose ends and unanswered questions in it. One of them really nags at me though. Why does Thomas decide to rescue the knight who is about to be hanged near the beginning of the book? Did his mother predict the hanging and tell him to be there? And it’s odd that she’s an Immortal who died. Immortal seems like a funny name for a mortal, if you ask me. I suppose these questions will eventually be answered later in the series, and so I’ll be happy to read more.

This post is part of the Christian Science Fiction/Fantasy Blog Tour. Check out what the others are saying, and come back tomorrow for a review of the sequel!

1 thought on “The Orphan King by Sigmund Brouwer, a review”