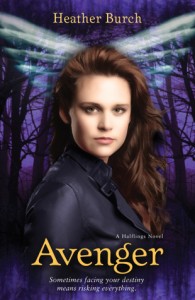 In this third book of the Halflings series, Nikki Youngblood now knows she’s a Halfling — a descendant of the dark-angel sons of God and daughters of men as mentioned in Genesis 6. She knows that her godfather Damon Vessler wants her to turn to the dark side, so to speak, something that’s so easy for a Halfling to do. But there’s something more she doesn’t know. And her godly friends are afraid to tell her about it. Not only that, but there’s a shredder monster out to kill her.

These books have great characters and a catchy premise: orphan angels. Halflings are given up at birth by their Halfling parents and raised by true angels, to keep their dark-angel heritage at bay. The Halflings have wings and unusual powers.

The book also has some overly familiar story elements: the love triangle with two “brother” Halflings vying for her attention, and a thoroughly modern heroine, able to physically fight and win. (But at least she’s not a wimp like Bella!)

I read the first book in the Halflings series, skipped the second, and read this one, the third. There was enough background information in this book for me to do this, and I suspect that even someone picking up this third book cold would have been able to figure out what was going on.

I think that fans of Twilight, especially Christians, will like this book. I’m glad to see Christians writing in this genre.