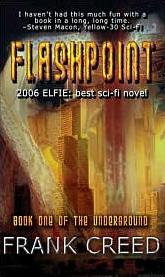 The Christian Science Fiction/Fantasy Blog Tour for December is examining the Lost Genre Guild Web site. I’m taking part. So I took a look at the Web site blog, starting at the beginning, in 2006.

One of the earliest posts is by Frank Creed, who is the individual keeping the Web site going. In a 2006 blog post, he coined a new phrase: Biblical speculative fiction. This term is more precise than “Christian fantasy/science fiction.” The new term can be used to distinguish the product, Christian-worldview science fiction or fantasy, from the producer, who may be a Christian writing secular fiction, for example Stephen King. Here’s Creed’s definition:

“Biblical speculative fiction [Bib-spec-fic], noun: stories with settings or races that are significantly unlike our own, told through a Scriptural world-view and framework. “(From a post on 10-11-2006)

I think having a new term for Christian fantasy is a good idea. For example, the title of my own blog which you are reading is the Christian Fantasy Review. But I actually am reviewing secular books as well as Christian worldview books, all from a Christian perspective.

The purpose of the Lost Genre Guild blog is to promote Biblical speculative fiction, or Christian-worldview fantasy and science fiction, using a number of voices and viewpoints. Promoting Biblical speculative fiction is also the purpose of the blog you are reading, and of the many participants in this blog tour whose blogs are listed at the bottom of this post.

You may ask, Why does this genre need boosting? How come it is “lost”?

If you just go into a library or a secular bookstore, you won’t see much of this Christian worldview fantasy and science fiction. If you’re like me and my kids, you would conclude that no one is writing it. How strange, we think, because of the towering examples of JRR Tolkien and CS Lewis, both recently re-envisioned for the big screen.

In fact, there are people writing it. That much is clear from what I have learned writing the Christian Fantasy Review, and from what I can see reading the early posts of the Lost Genre Web site. Clearly there are plenty of people out there who love to use this set of tools to be creative and to convey some of God’s great truths.

But there are plenty of potential readers out there who are wary. Are science fiction and fantasy writers promoting evil?

A Lost Genre blog post on 10-12-2006 posted by Steve Rice provides some guidelines to help wary readers identify works from the dark side. Rice suggests avoiding a work if it contains 1)detailed instructions on how to do witchcraft, or 2) preaches a false gospel, or if it glamorizes witchcraft or psychic powers. “Tolkien and Lewis didn’t; witches in “Narnia” are a loathesome lot,” he adds. If these two warning signs are missing, any magic is just a plot device, he suggests.

I think that’s very good advice for potential readers. The successors to Tolkien and Lewis are out there. Let’s find them! And enjoy the seeking! — Phyllis Wheeler

Check out the other blogs on the Christian Science Fiction/Fantasy Blog Tour: