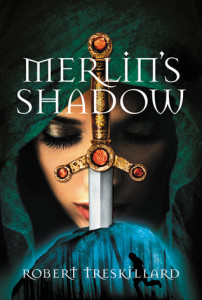 I reviewed the first book in the series, Merlin’s Blade. This second book, like any middle book in a three-book series, leads us through some majors trials and travails for the main characters. Merlin finds himself fleeing the traitor Vortigern, who has just killed High King Uther. With Merlin are the infant Arthur, Uther’s son; Colvard, Uther’s ancient bard; Natalenya, Merlin’s beloved; and Garth, a helpful teenager. Somehow they also pick up a helpful enemy druid and a member of Vortigern’s war band, loyal to Arthur.

Left behind is Merlin’s younger sister, Ganieda, who thinks she’s abandoned (though Merlin has asked someone to care for her). She goes to stay with her druid grandfather. She’s angry with Merlin, angry enough to wish him dead. And in her case, with the devilish tools at her disposal, she’s just about able to get him killed.

Who is loyal? Loyalty is a theme in this book. Those who have reason to be loyal are not, and vice versa. So, what is loyalty? Should or can Merlin be loyal to his murderous little sister?

Robert Treskillard has done an enormous amount of research, and it shows. There’s a very authentic feel to this tale, which takes place starting in Cornwall but stretching up to Scotland and somewhere far to the north across the sea: Norway?

The story has some very unexpected turns, always a big plus! It certainly kept me turning pages. It does a great job of setting up many of the characters in the Arthurian saga, especially Merlin’s little sister Ganieda who becomes a witch, Morgana. She’s clearly the big antagonist for the next book (as well as a minor antagonist for this one). I liked this book!

This is part of the Christian Science Fiction/Fantasy Blog Tour. Please take a moment to see what others are saying about this book.