But there’s no more hiding when he recognizes the body on the gurney. It’s his own. Or at least it looks like him, same build, facial features, hair color, and Star of David tattoo on the right arm. And the facial scar. But this fellow has a bullet hole in his chest. That’s when we step into the really bizarre: the detective thinks the real question is why someone would want to kill Zeph. The no-nonsense detectives from the Twilight Zone are treating it as a homicide. 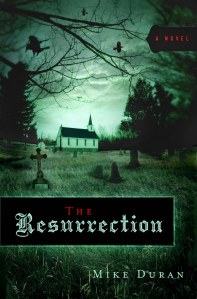 Rev. Ian Clark is Ruby’s humble and confused new pastor at her moribund church, where there are only three who want to be in a prayer group, and where many–including Ruby’s husband–have sensed hypocrisy and left. In his church office, Clark gets regular and mystifying visits from what seems to be the ghost of a puzzled young man.

Clark’s ex-wife calls him and tells him she senses he is in danger. He is, it turns out, a marked man. And Ruby’s destiny may be defined by an old prophecy as well, one that seems to foretell her death. Are both of them doomed to die to appease the evil spirits poisoning their town?

Yet, when I had finished it, I wasn’t fully satisfied. I hadn’t gotten a real sense of the demons driving the story. Instead, the story focuses on their minions, the human bad guys. Also, the dead tree was too static a vision to be arresting to me, as it was to the character who experienced it. So for once, I, the thin-skinned reader, was looking for something a little scarier.