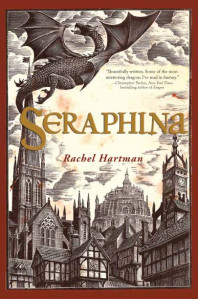 I’m taking a look at this secular book from a Christian point of view. If you or your son or daughter is a fantasy fan, they’ll be reading a lot of books published by secular publishers, because that’s where the marketing channels are. If you’re in a bookstore looking for a fantasy book for young adults written from a Christian worldview, I’d advise you to look for books on the secular shelf published by one of the major Christian houses (especially Thomas Nelson and Zondervan/Zonderkids, which are aiming for secular readers). These books won’t have an obvious faith message, but they’ll be consistent with a Christian worldview. Also check out books available online, of course!

So, back to this book. Seraphina is a peculiar young lady living in a world where the dragons and the humans live together in very uneasy peace. The dragons are able to fold themselves into human shape to live among the humans and pursue academic studies, to which they are well suited. The humans are suspicious and occasionally very nasty to the dragons, many of the humans wishing for the return of a time when the two groups were at war.

Seraphina has wonderful gifts of music and is working at the queen’s court. Her mentor is a dragon in human form, Orma. Unlike everyone else, she enjoys dragons and is fond of Orma. Soon palace intrigue engulfs Seraphina, and she must muddle through the very difficult question of who she is, while war between the two groups threatens.

What do I think? I think the characterization in this book is wonderfully strong, as is the premise about dragons being able to change shape to humans. But I found the plot to be somewhat weak. I am looking for a heroine who’s on fire to accomplish something, but Seraphina is more introspective than that.

As for religion, Seraphina and her countrymen pray to some saints who seem to not be real. Ah, me. Well, at least Seraphina has some moral sense, knows that lying is wrong, as is hanging out with someone else’s fiance (though she does both). I judge this book to be fairly enjoyable and not harmful to your average young adult, perhaps good fodder for discussion about right and wrong on those two questions.