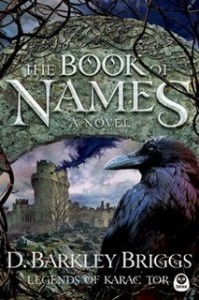 The Book of Names by D. Barkley Briggs, a review

The story starts in Missouri (my adopted home state) where a family of four boys grieves for their mom, who died of cancer. The kids are four boys, the oldest 15. They have just moved to the country north of St. Louis with their dad.

Hadyn and Ewan, the older two, are clearing a briar patch and discover an arched stone scrawled with Viking runes. Suddenly, four mysterious ravens drop messages at their feet and disappear through the arch. The messages, signed by “A,” are four identical scrolls calling them to the Hidden Lands. Soon the two boys are following the ravens through the arch.

They find themselves in the land of Karac Tor, which is at war. Magic is commonplace here, including some magic familiar to our ears, such as fairy folk and Arthurian mystery, and other unfamiliar magic. The boys, who really just want to go home, are drawn into a massive conflict between godly monks and an evil sorceress who is turning all the teenagers in the land into zombies under her command. Hadyn and Ewan discover they have some special magic powers of their own in this land.

The monks are looking forward to the ninth and final coming of Aion, the son of the father God. But plenty of tribulation is happening first. Hadyn is captured by the sorceress and is on his way to becoming a mindless follower. Younger Ewan finds he has the courage to lead a rescue. Both brothers prove their loyalty and courage in a battle with the sorceress.

Then Hadyn and Ewan discover that their younger twin brothers have come through the portal too, leading into the next book, where the conflict is with the evil power behind the sorceress, the Deceiver himself.

The Book of Names is a keeper. It weaves action together with metaphorical descriptions. Characters are fully drawn and believable. The two boys are full of faults and fears at first, but they learn courage because they have to, facing the sorceress and her slaves. Briggs brings his fantasy world, Karac Tor (a place to build character, I get it!!) to life.

I did find this fantasy world to be rather dark. I wish it had more islands of light in it. Nevertheless, I am really looking forward to the next book, Corus the Champion, coming out in March 2009.–Phyllis Wheeler

If you want to buy this book, you can help pay the expenses of this blog by buying it through this link:

This review is part of the Christian Science Fiction and Fantasy blog tour. Check out other participants of the tour. We’re all looking at the same book for the next three days.

4 thoughts on “The Book of Names by D. Barkley Briggs, a Review, Part 1”