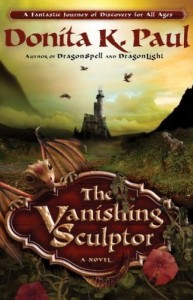 The Vanishing Sculptor by Donita K. Paul, also called The Dragons of Chiril, a review
Published by Waterbrook Press, 2009, 398 pages.
Genre: Christian fantasy, suitable for middle grade and up

It’s a medieval-style world, where friendly wizards use magic, technology has advanced as far as use of swords, and the animal kingdom includes huge sentient parrots as well as dragons, large and small, who communicate telepathically.

A young woman,Tipper, lives a sheltered life with her mother in an elegant house that has seen better days on the edge of a forest. Her artist father mysteriously vanished 15 years before. Her mother is pleasantly out to lunch, talking a lot of nonsense most of the time. Among other strange things, the mother claims that she sees Tipper’s father in the evenings.

When her mother goes on a trip, Tipper sees her father in the evenings too. It turns out he is in quite a fix, appearing but then vanishing into thin air after only a few minutes. It all has something to do with a “gateway” his wizard friend across the world in Amara rigged up in the closet of her parents’ bedroom.

The gateway is coming apart, threatening the fabric of the world. Tipper and her father, the wizard friend, a librarian, and a giant parrot set out on a quest to find the keys to putting it back together. Later on we find out that there are also some bad guys who want to take over the kingdom using the gateway.

Donita K. Paul wrote another successful series, the DragonKeeper Chronicles, which I have not read. The DragonKeeper stories are set in the same world as the characters in The Vanishing Sculptor, but they are separated by time and place. So to someone familiar with Paul’s work, the background and settings must seem familiar, though the characters aren’t.

For me, barging into this world clueless, it was difficult to sort out the seven races. Paul refers to these races by name–emerlindian, tumanhofer, etc., without explaining that they are races. After several chapters of puzzlement I looked up the strange words in the glossary, which I was glad to find.

Other than that, I found a well-crafted story. Tipper’s teenage character is self-centered in a very realistic way. Her bossy guardian, the large parrot, is also a fully-drawn self-important kind of guy. Only the wizard from Amara seems two-dimensional through most of the story, continually dropping lizards from his clothing with little variation. However, I understand he is a character in the other series, and so is probably more developed there.

Christian underpinnings for this story are definitely there. A loving deity is watching over the characters, sending an emissary to intervene. Paul does a great job of touching the heart of the matter in a lovely and satisfying way. So, I heartily recommend this book for a variety of ages. -Phyllis Wheeler

10 thoughts on “The Vanishing Sculptor by Donita K. Paul, a Review”