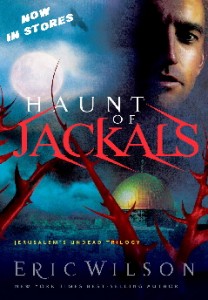 However, by some oversight the publisher sent me a book. Not wanting to waste a good
book, I decided to start reading it. Sure enough, the suspense on about page 90 just was too much for me. But I can report to you what I found up to that point.

Wilson has done a great job of constructing a tale with a Christian worldview. His complex characters ring true. The action is virtually non-stop, providing a wonderful evening for adrenaline junkies unlike myself. Plus there’s the horror dimension, with the demonic undead vampires which have this uncanny ability to temporarily abandon their host bodies and take up residence in an animal. So the main characters never know if the next blackbird is a spying enemy or not. Talk about nerve-wracking!

The narrative, at least in the first part of the book, revolves around two lead characters, Cal and Gina. The point of view and narrative follows Cal for a while, then Gina. This seems to work well for this tale. Cal is one of those individuals who rose from the dead when Jesus rose from the grave. These individuals were granted immortality and given a task, to protect humanity. They recruit mortal apprentices to help them.

At page 90 I leave the book wondering whether the young apprentice Dov survives. I expect Gina to eventually find out that Cal is her father, and that she is half immortal. I wonder whether this news will cause her to accept the predicament she is in and become a follower of the Almighty God, rather than a modern nay-sayer. I wonder whether the Lord will intervene to rein in these all-too-powerful vampire enemies, who seem likely to overcome the good guys. I am curious about the fact that Gina has a twin brother who is not mentioned other than to say he exists. Perhaps he shows up later in this book, or in the final book.

9 thoughts on “Haunt of Jackals by Eric Wilson, a partial review”