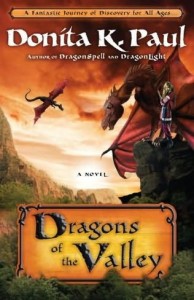 5 thoughts on “Dragons of the Valley by Donita K. Paul, a review”