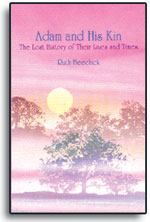 For example, the sky may have been pink, not blue, in pre-flood days. A large amount of moisture was probably suspended in clouds above the earth, making the earth warm and hazy, somewhat like the atmosphere of Venus. There was also a lot of water stored under the ground, Beechick supposes. When the cataclysm came, it wasn’t just rain but also violent earthquake. She doesn’t mention it here, but I know the theory is that at this point, layers of mud and fossils were laid down quickly, and folded quickly. Organic matter laid down in this way became beds of coal and deposits of oil, under pressure. (Coal and oil are not under formation today! So where did they come from?)

So what is the value of this book, a history that’s not a history? For me, it’s a delight to be able to visualize these early days. I highly recommend this book, especially to anyone struggling with trying to believe the Bible, all of it, and finding the Genesis accounts hard to swallow.—Phyllis Wheeler

All you Christian fantasy and sci fi lovers out there, it’s time to nominate a book for the annual Clive Staples award. Clive Staples being, of course, what C.S. stands for in C.S. Lewis. The award, administered by several major players in Christian fantasy-sci fi, is nearly new–the first award went last year to Dragonlight by Donita K. Paul.

For the 2010 award nomination, a book must be published in 2009 by a royalty-paying publisher. The actual selections will be made by reader’s choice. You might want to put in an email subscription to the Clive Staples Award blog so you’ll know when the polls are open! In order to vote, you have to have read at least two of the books which have been nominated.

So, take a minute to think about it, and then go to this link:

The Legend of the Firefish by George Bryan Polivka, a review

Book One of the Trophy Chase Trilogy

This is a fantasy book in that it is set in an invented place, Nearing Vast. The people groups are invented, and so on. But this is a world that is somehow also a part of ours; Jesus of Nazareth is present, and so is his church. The God of heaven and earth responds to prayers. “Coincidences” happen that are too strange to be coincidences.

Packer Throme is the son of a simple fisherman. Because of a simple act of kindness when he was a child (keeping another child from dying of exposure), he is given the gift of an education–the child he saved turned out to be the crown prince.

With his education, Packer tries seminary but gets thrown out after an altercation of some kind. Next he studies with the greatest swordsmaster of Nearing Vast.

He returns to his fishing village, where the young Panna Seline waits for him. But he isn’t planning to stay. He simply wants help stowing away on a pirate ship that has paused nearby.

You see, he has heard that this particular pirate ship, the Trophy Chase, isn’t pirating any more. Instead, it’s hunting the Firefish, a sea dragon of legend whose meat has great value. Throme wants to learn the secrets of hunting firefish and bring them to his village, so the fisherman can do more than eek out a living.

Throme makes it onto the pirate ship but manages to make an enemy out of Talon, a master swordswoman who is the ship’s security officer. The captain asks Talon to leave the ship, but not before she has tortured Packer and learned about his village and about Panna. She heads for shore, murder in her heart.

Does she succeed in killing everyone in the village, including Panna? I’ll tell you a bit more: Panna sets out on an adventure trying to follow Packer, and her path meets Talon’s.

Meanwhile, out at sea, the Trophy Chase heads into deadly peril in pursuit of the firefish. Will the ship return?

I really like this book. There’s plenty of action. Characters are memorable, not sterotyped. The lore about sailing a tall ship seems genuine. The fantasy parts of the story, especially about the habits of the firefish, are well-woven. There’s no magic, but there certainly is a fantastic beast: the firefish. Polivka lets us get right inside its head. In fact, he does a fair amount of hopping around with his point of view, but it is well handled; I didn’t find it confusing.

The main characters have flaws like the rest of us, but they lean on the Lord as the story unfolds and pray for help, and God answers. The ruffian who appears to be a bad guy at the beginning comes around in the end. In fact, Polivka makes it clear that there is hope for bad guys, too. Non-Christians who have reviewed this book have not found it preachy or heavy-handed, and that’s a good thing, too.

In short, this is a great book. Don’t miss it. And if you live in St. Louis, you may be able to check it out from the Webster Groves Public Library. I asked the librarians to buy more Christian fantasy fiction, and they bought this one for us. — Phyllis Wheeler

PS: I have now read the other two books in the Trophy Case Trilogy, found them to be wonderful as well. The most amazing thing about these books is that I am totally unable to predict where the story is going to go. Polivka has a very original mind! And is a great storyteller. So read them and be uplifted.-PW, 6/18/2009