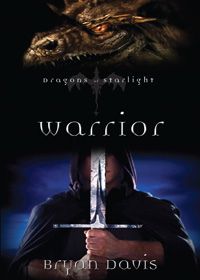 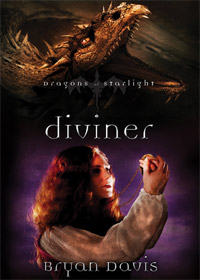 Dragons of Starlight by Bryan Davis, made up of:

Bryan Davis’s four-book fantasy series Dragons of Starlight tells a tale of heroism across two planets, Starlight and Darksphere. Jason Masters, a teen from Darksphere, realizes that people from his planet have been enslaved on the other. He takes it as his mission to rescue them. After all, he’s a warrior. And he wants to find his brothers, who have gone to Starlight before him to free the slaves and haven’t returned.

Once there, he meets Koren, a human enslaved by dragons on Starlight. Koren’s got some unusual gifts–she’s a starlighter, or “magical” storyteller. Can she help save her people? Does she want to?

After all, she’s enslaved by the prophesied new king of the dragons, who has just hatched from a black egg. He needs her because he is blind, and through a telepathic link he can see through her eyes. Plus, he can torture her at will if she turns away. But the Creator seems to be calling her in a different direction.

Jason’s childhood friend Elyssa accompanies him. She finds that she’s got some starlighter gifts too. Is she willing to risk everything to free these people whom she has never met?

And what about Arxad the dragon? Does his allegiance lie with his overpowering twin brother, or with the humans he knows need his help? Is he a friend or a foe of the slaves?

This is a well-told sprawling tale, with unforgettable characters and surprising plot turns. It’s pretty cool to have two races of sentient beings, one being dragons. With intervention from the Creator at several points, it’s a Christian book. I’m enjoying reading it. I suspect you will too.