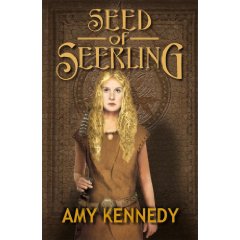 Worldview: Christian. The One True God is in charge.

This book is a love story which will appeal especially to girls, I am thinking. The protagonist is Astril, a daughter of the High Priestess in a matriarchal society that is slave to a religion of human sacrifice. They are called the Seerlings. The neighboring enemy kingdom is a patriarchal society, some members of which follow the One True God. They are called the Harkonians.

As a child, Astril is by herself in the woods for a few days, as called for by her religion, when she finds a boy from the neighboring Harkonian kingdom who has fallen off his horse and is injured. She tends him and heals him. This is Toren, the heir to the Harkonian throne.

The two are thrown together later when Astril is captured and enslaved by the Harkonians. Toren recognizes her and protects her. Eventually he falls in love with her. He sends her for safekeeping to a priest of the One True God. While at his remove enclave, she becomes a believer.

However, Astril’s priestess sister, Gallian, comes to return Astril to her mother. As a priestess, Gallian has some magical powers and manages to kidnap both Astril and Toren and bring them back to the grim land of the Seerlings, intending to sacrifice both of them. The story resolves with some intervention by the One True God. But the story is not completely told, and we are left waiting for the next book.

I enjoyed this page-turner. If you have a teenage daughter, this would be a great book for her to read, especially if she is a Twilight fan. You could discuss the similarities and differences. The similarities I see between Seed of Seerling and Twilight are that they are both fantasy love stories where the heroine keeps her purity before marriage. The differences involve the Christian foundation of the Seed of Seerling, resulting in self-controlled and self-effacing actions on the part of the heroine. In Twilight, the heroine is the opposite of self-controlled–she passively lets her feelings rule and decides to forget about what her head might be telling her.

This book does have a few rough edges in the editing, which won’t be obvious to most readers. The publisher, VMI Publishers, is not a traditional publisher, although it is able to distribute the book pretty widely. However it does not appear that VMI was able to get a review for the book in Library Journal or Publishers Weekly, and so most libraries won’t be taking this seriously. That’s a shame, in my opinion. It’s a great story with a solid foundation.–Phyllis Wheeler

If you would like to buy this book, please help me pay the expenses of this blog and buy it through this link: