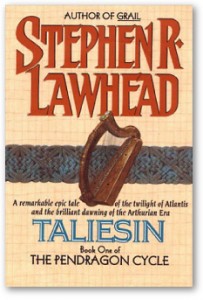 The Christian Science Fiction/Fantasy Blog Tour this month is asking each of us to review a favorite book. I chose Stephen Lawhead’s Taliesin, Book One of his five-book Pendragon Cycle. Unfortunately I no longer have a copy of this book–I am sure I enthusiastically lent it to various people until someone forgot to return it. But I do remember it pretty well I think.

This is the story of Charis, a princess of Atlantis, and Taliesin, a bard from Britain. A prophet on Atlantis warns of impending doom, but of course everyone there ignores him. Except, after a while, Charis, who prepares her family for disaster. A group of them survives the cataclysm that swallows Atlantis and lands on the shores of Britain in the days when Rome’s influence is waning.

The Atlanteans are bigger, taller, and stronger than the Britons, and they live considerably longer–not to mention they are used to the comforts of civilization. They are called the “Fair Folk” in the book and seem mysterious to the simple Britons.

Taliesin, meanwhile, is a druid bard who becomes a Christian. He woos, converts, and wins Charis, now the “Lady of the Lake” living on an island in a lake in southern Britain with her father. From the union of Charis and Taliesin comes Merlin, who has prodigious gifts from both his parents.

The rest of the Pendragon Cycle is built on this foundation. I loved these books, especially the solid Christian worldview underpinning this wonderful fantasy. If you haven’t read them, do so!!

Find out favorite books of the other tour members! See below.

AND don’t forget to vote for your favorite Christian fantasy novel published in 2009. This is the Clive Staples Award; votes are being taken through the month of August, so your time to vote is running out.

CSFF tour members for this month:

Is this a fantasy book? Not really. There is only one character who has attributes that are truly larger than life: the Banfaith seer, Angharad. She appears to be several hundred years old, a Celtic seer in the tradition of Merlin, but of course her age isn’t pinned down, so who knows?

Are Arthurian legends fantasy? This book falls in the Arthurian vein, in that it is speculating about the possible history behind a legend.

Tuck is the final book of the King Raven trilogy, which is a long, wild yarn spun to answer the question, who might Robin Hood have been? Apparently the traditional location, Sherwood Forest, isn’t very conducive to a good semi-historical tale, at least as far as Lawhead is concerned. Now Lawhead, who has spent much of his career exploring Celtic culture and myth, is entertaining us by bringing his broad knowledge of the Cymry (Welsh) to the Robin Hood legend.

What if Robin Hood and his longbowmen were really Welsh resistance fighters, seeking to counter the heavy hand of William the Conqueror’s son William Rufus? Lawhead bases his three-volume tale on this supposition.

The first book, Hood, stands mostly in the point of view of Bran, the Robin Hood character. (Rhi Bran y Hud is what he is eventually called by his countrymen.) The second book, Scarlet, revolves around the point of view of Will Scarlet, who joins the outlaw band living in the ancient woods of the March, the eastern borderland of Wales. And the third, Tuck, contains much from the point of view of Father Aethelfrith, whom the legend calls Friar Tuck.

There are other familiar characters from the legend too: maid Marian becomes Merian, Bran’s headstrong beloved. Little John becomes Iwan. The evil sheriff of Nottingham becomes the ruthless Norman Sheriff de Glanville. And, like in the legend, the outlaw band members are adept at guerilla tactics, shooting the longbow, repeatedly besting their adversaries. Those adversaries come after them in far larger numbers as knights on horseback, carrying sword and spear. They nearly always lose. But the band of outlaws living in the woods suffers from hunger and privation, so they are not winning, either.

As the story progresses, Bran becomes more and more adept at fooling others–he is a trickster who masters the art of illusion. He’s using it to further his quest to gain his rightful throne as a petty Welsh king, and to aid his suffering countrymen where he can. Bran also leans heavily on his spiritual advisor, Angharad, and consistently makes decisions based on mercy rather than vengeance. It is Biblical thinking we hear from Angharad and Bran.

Meanwhile, William Rufus, Baron Neufmarche, and other Normans have been ruthlessly enforcing their domination and taxation on the poor citizens of Britain and parts of Wales. Their characters in previous books seem uniformly villainous and bullying. Double-crossing is the way they operate.

Will the band of outlaws succeed in convincing the Norman king that he should live up to his previous agreement and install Bran as his vassal? Will a daring excapade in the north of Wales convince Bran’s kinsmen to come to his aid? Read it to find out!

And what do I think?

It’s a great and riveting tale. Not only did the fantasy lovers in my household want to read it, but the historical fiction lovers too. What a gas, to reimagine Robin Hood in this totally different way.

However, the way that the plot resolves doesn’t seem believable to me. In particular two characters, the impetuous Merian and the cold William Rufus, act in a manner that seems out of character. Another character, Baron Neufmarche, also does some surprising things, but his change of heart is developed enough to be believable.

Also, Bran’s character in this book seems less real than in the previous books. He is just too successful at duping the enemy Normans, and too good at turning the other cheek. It’s as if he’s stepping into the realm of legend although he is still alive.

These reservations didn’t detract much, though. I heartily enjoyed reading this trilogy. It’s so good and satisfying to me to read a great tale with a solid Biblical worldview as its foundation. And who knows? Maybe Robin Hood really was a Welshman. Maybe Lawhead is onto something. But I guess we’ll never know.–Phyllis Wheeler

Take a look at what others on the Christian Science Fiction/Fantasy blog tour are saying about this book in the next three days: