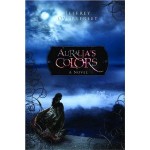 Auralia’s Colors is a multi-layered story, the beginning of a longer story arc called The Auralia Thread. Auralia, an orphan of mysterious origin, comes to live with the outcasts outside the kingdom of House Abascar. As the story unfolds, Auralia’s unusual powers become apparent; she has powers of healing related to amazing uses of colors.

In the Expanse, the land where Abascar is one of four houses or communities, color has different properties from what we are used to. It’s possible to hoard colors and even ban them, which is what the misguided king of House Abascar has done.

This king, full of fears, burdens his people and keeps them from joy. He is confronted with Auralia, who bravely weaves and wears colors to bring healing in defiance of his ban. He fails the test, with disastrous results.

I had a bit of trouble getting into this book and identifying with Auralia, who seems somehow otherworldly. But once I got into the book, I had trouble putting it down. The characters are well drawn, the plot has wonderful twists and turns, and many subplots with a variety of characters weave together to create a cohesive whole.

It’s not an overtly Christian book, but the Christian worldview is plainly there. There is a deity called the Keeper who figures in the plot, and who reminds me a bit of Aslan–appearing as an animal, yes, but far more than that.

Auralia’s Colors clearly lays the foundation for a larger work, and I am very interested to read the rest! –Phyllis Wheeler

My review of the third book:

My review of the fourth book:

This is the first post for the Christian Science Fiction/Fantasy (CSFF) Blog Tour on Jeffrey Overstreet’s newest novel, Raven’s Ladder . That book is third in the series that began with Auralia’s Colors, so I thought I had better read Auralia’s Colors first. For my take on Raven’s Ladder, take a look tomorrow at this blog! In the meantime, please take a look at what others on the blog tour are saying about Raven’s Ladder, and possibly the books that came before it too.

3 thoughts on “Auralia’s Colors by Jeffrey Overstreet, a Review”