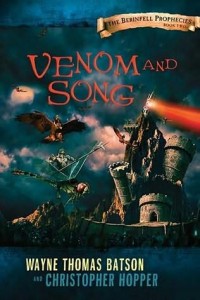 I reviewed Curse of the Spider King, Book One of the Berinfell Prophecies, last year. It told the tale of seven elf lords from the world of Allyra, adopted and raised on Earth. At about the age of 13 special powers for each were becoming apparent, such as the ability to walk on air, read minds, shoot arrows accurately, shoot fire from hands and feet, and super strength.

In that book, the young elf lords are told of their heritage at about the same time that horrible beings from Allyra begin pursuing them and their families. It’s clear that living a regular life on Earth isn’t going to be possible, and all seven decide to go to Allyra to see if they can help the elves.

As Book Two opens, the teens are arriving in Allyra, against opposition from the Spider King and his minions. They manage to make it safely to the underground home of the elves, and then they spend several months training to work together and to use their individual special powers.

They learn more history: that the Elves have strayed far from their creator and God, Ellos, and had even at one point enslaved the gwar, the race to which the Spider King belongs. At the end of their training, the seven follow a prophecy and learn an amazing song, a song that calls the hearers back to Ellos.

Finally it’s time to attack the Spider King. The elves mount an assault on the Spider King’s fortress, Vesper Crag. It’s a long and complicated battle, where the Spider King matches elven ingenuity with his own, again and again. Will the seven lords make the difference? And what will be the cost? Do the elves call on Ellos? Does He answer? And who is the Spider King, anyway?

What I really like about this series is the waywardness of the elves, the supposed good guys. They remind me of the children of Israel during the time of the prophets, having abandoned their loving God, doing their own thing. In this case they had even enslaved the other major race in their world–and then changed the history books to delete that part once it was over.

The elves have paid a steep price, the loss of their land and city and the deaths of their seven lords who had special powers. (The teen lords are the unexpected survivors.) The elves must hide underground, in a situation particularly difficult because elves require exposure to sunlight to stay alive.

The story opens at a time when the elves are not really aware of how much they have strayed from loving their God. We the readers become gradually aware of the situation at the same time as the elves do.

Now, portions of this book reminded me of the X-Men and similar works, where a group of teens with special powers is receiving instruction in using them. Another difficulty I had was keeping track of all seven protagonists. But each is given a unique and memorable personality, along with a unique and memorable gift, and I expect my difficulty has more to do with my age (over 50) than anything else.

I’ll be very interested to read more books in this series. I recommend this book for fantasy lovers of any age.

This is part of the Christian Science Fiction/Fantasy (CSFF) Blog Tour, and I received a free copy for review. Check out the links below to see what others are saying about this book.

Also, here are the blogs for the authors:

7 thoughts on “Venom and Song by Wayne Thomas Batson and Christopher Hopper, a Review”