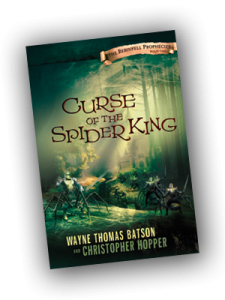 This story unfolds in our own world, focusing on first one, then another of seven (yes, seven) 13-year olds. Each of these adopted teens is going through normal life and growing pains, more or less, when a mysterious teacher or benefactor hands him or her a handwritten book with magical properties, and says it is his or her very own to keep. Through the book and the benefactor, these kids discover they are really elves, born in another world.

A massive background story is the story of the elves in the other world, Allyra. As each of the teens reads parts of the handwritten book, we the readers learn the sad history of Berinfell, the capital of the elves. It was overwhelmed by vastly superior forces belonging to the Spider King, an event that happened 800 years before in Allyra but only 12 years before in Earth time. A remnant of elves survived underground. We learn that Allyra and Earth are connected by portals, created by the Spider King for snatching slaves from this world.

The teens each come of age into some strange powers and suddenly find themselves the quarry of evil “men” wearing trench coats and sunglasses—who aren’t men at all, but beings from Allyra. The kindly teachers and benefactors, who turn out to be elves, protect the kids and discuss with them the need to leave their families in order to protect their loved ones. The elves want the teens to return to Allyra and take up the cause of their kindred. The teens are torn. But they must make the decision.

The reason the evil beings are after them is that the seven teens are the sole surviving elf lords with supernatural powers. Their elf-lord parents died protecting them in the Battle of Berinfell. How did the children end up on earth? Hint: there’s a prophecy involved, and a curse.

This book is very well written and well paced. A huge back story is dealt with very well, using the device of each teen reading some of the history book, so the back story doesn’t derail the narrative. Characterization is excellent; each of the teens clearly has his or her own personality, as do the elven protectors. The conflict with the Spider King begins in the back story and continues through the whole book, which points to sequels at its end. Description uses the telling detail well. In short, this book is well-told.

How about the Christian basis for it? There is a God in Allyra, called Ellos, the same being as our God. The elves of Berinfell occasionally ask Him for help, and occasionally remember to quote scripture at the evil beings, which defeats them. But it seems that a lively faith is absent. I am guessing and hoping that this is part of the series’ plot: that the remnant of elves will to turn to Ellos and cry for help with one voice.

Now, there is one strange coincidence pivotal to the plot: a knowledgeable enemy turns traitor to the Spider King and gives the elves vital information about the whereabouts of the elf-lord children. There is no reason for him to do this, so it’s clearly a divine intervention, at least for a reader looking for such things.

My only complaint about this book is that seven protagonists is too large a number for me as a reader. I felt the need to keep a written list of them and their traits, in order to process the story. Since each of these protagonists has one or two elven protectors, I was having trouble keeping those names straight also.

Nevertheless, I highly recommend this book. Readers of any age will enjoy it and wait for the next one, like I am.

For more points of view, check out others on the Christian Science-Fiction/Fantasy Blog Tour, who are talking about this book for the next three days:

5 thoughts on “Curse of the Spider King, a Review”