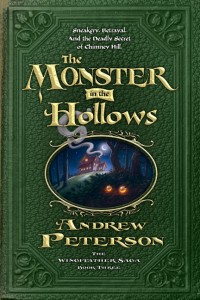 4 thoughts on “The Monster in the Hollows by Andrew Peterson, a review”