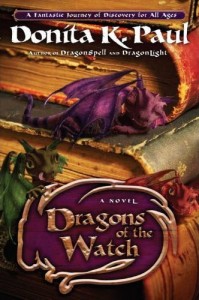 Set in the world of Amara and Chiril where Paul’s other books take place, this one focuses on a new character, Ellie. Ellie belongs to the hobbit-sized tumanhofer race; she’s a farmer’s daughter who longs to go to the upcoming royal wedding.

Those of us who have read Paul’s two most recent books, Dragons of Chiril and Dragons of the Valley , will recognize the other main character, Bealomondore, a tumanhofer artist. In the previous books, he was a minor character, a unique and quirky war hero. In this book, he gets the romantic lead. (It’s not necessary to have read the previous two books, I am thinking. This one stands on its own very well.)

Ellie’s a great character, full of determination, big-sisterly instinct, and insecurities. Bealomondore’s your basic swashbuckling artist. The giant librarian is overwhelmed by his assignment, raising 60 six-year-olds. I really enjoyed getting to know these unusual characters. There’s a strong faith element, too. (But I thought the plot could have used some more tension in the middle.) It’s a gentle story, easy on the suspense and violence, and would make a good family read-aloud.