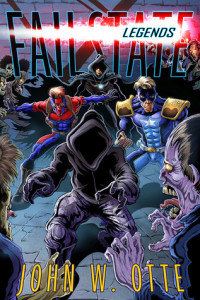 Failstate: Legends is the middle book of a three-book series, but it stands alone very well I think. No one who picks it up cold like I did will think this is an unfinished story, and unexplained details from the past just make it seem more realistic.

Zombies are coming out of nowhere. And Failstate is the only superhero on duty, so he has to stop them. Yes, real zombies. But they aren’t possible. So where are they coming from? Will other superheroes from other towns lend their help? Through this struggle, will he win respect, or continue to fail?

The book has a cartoonish cover, but it’s not a graphic novel. It has short, action-packed chapters and great story elements, including strong characters who learn and change over time and a plot that’s full of surprises. It has a strong faith element too. I recommend this book!

Note: I received a free copy for review. 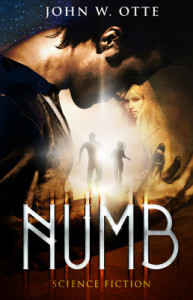 Crusader, an assassin, feels neither emotions nor pain. His memory reaches back only a few years. He k nows this numbness is a gift from God, the vengeful god whose deacons use Crusader to kill heretics and heathens. Because of it, he’s a better killer.

His bosses send him after a young blonde woman, Isolda. It’s her turn to die. Or is it? For reasons he doesn’t understand, he can’t do it. His long-dead emotions boil up.

He’s made his choice. In refusing to kill her, he’s become a target himself. Crusader and Isolda flee together. Can this unlikely team find safety? Can they find answers? Or will the bounty hunters turn them in?

And what about the winsome faith that Isolda displays? Isn’t it heresy?

I found this book riveting, full of action and insight. The main character starts out a psychopath, but it’s not long before he starts on the path to change in a way that’s believable and speaks to the heart.

His bosses at the Ministrix spread twisted jihad Christianity, providing me great food for thought. In what ways do we try to make our faith a set of achievable objectives and bury our sins? How do I personally distort Jesus’ words?

This review is in conjunction with a number of bloggers at the Christian Science Fiction/Fantasy Blog Tour. Check out what others are saying:

I reviewed the first book in this series, Captives, and reflected on it some more for a blog tour. It tells the story of some rustic future Colorado mountain dwellers who are kidnapped by a nearby group of people who live in what is very erroneously called the Safe Lands.

All the three brothers want to do is round up the people of their former village, Glenrock, and escape. While the previous book focused on Mason, this one centers around his brother Omar, the one who betrayed them to the Safe Landers. Now that Omar is repentant, his brothers have decided to trust him and let him join their rebel forces. Omar does his best, unless he’s distracted by the diseased pleasures offered by the Safe Lands.

In the first book, the medic Mason was able to free the Glenrock women who were being held in a prison-like harem. In this book, Mason and Levi desperately want to free the Glenrock children, held in a prison-like boarding school, so they can all go home. While he’s at it, Mason also desperately wants to find a cure for the thin plague, a sickness that dooms all the Safe Landers, including the woman Mason loves–and his brother Omar.

What I like most about Jill Williamson’s writing is her ability to write what a character is thinking and feeling. Her ability to do this is amazing. Of course, it’s got great characters and a twisty plot, so … read it!

Take a look at the nifty book trailer for Book 1:

This is part of the Christian Science Fiction/Fantasy (CSFF) Blog Tour. Please check out what others are saying about the book!