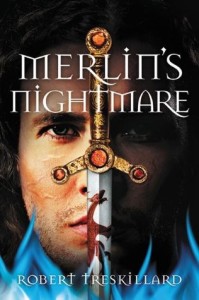 But we know how the story ends: the Anglo-Saxons took over all the Britons’ lands except for Wales and (in France) Brittany. That’s the thing about writing the Arthurian legend: we know the main characters, and we know how it all ends. But … do you have room for new imaginings here? I do.

Merlin’s Nightmare by Robert Treskillard, Book 3 of the Merlin Spiral
Published 2014 by Blink, an imprint of Zondervan, 431 pages
Genre: Arthurian fantasy, suitable for young adult and up

I’m really enjoying Treskillard’s re-imagining of Merlin as a non-magician. Merlin is a Christian who occasionally has visions. As the book opens, Merlin, in hiding in the North, has married his beloved Natalenya and has two children. They have also raised the young Arthur under a different name, withholding from him his true identity. But now that Arthur is 18, it’s time to tell him who he is and let him start making decisions.

The winds of war are blowing. Two summons to fight arrive. Where will they fight? The Britons (led by the traitor Vortigern) find themselves attacked by major enemies on three sides: the Picts from the North, the Saxons from the east, and Merlin’s witch sister Ganieda (Morgana) and her wolf-men from the west. Merlin is inclined to fight in the North, but Arthur slips away south to aid Vortigern against the Saxons, not knowing Vortigern will probably recognize him and kill him. Can Merlin reach him in time?

And how can Merlin protect his family in the North, if he isn’t anywhere nearby? Can he convince Arthur that the most important enemy is Merlin’s sorcerer sister, who orchestrates the others? And how on earth could they defeat her and her savage wolf-men?

I found this book to be quite the page-turner with plenty of unexpected plot points. Merlin’s character goes through a learning curve, which I won’t spoil for you. I enjoyed the fresh take on Gwenivere and the idea of a novel use for Stonehenge. It’s a terrific book; put it on your reading list, and be sure to give it to the young people in your life, especially the guys. Note: I am astounded at the amount of research Treskillard has put into these books, detailed in the appendix. 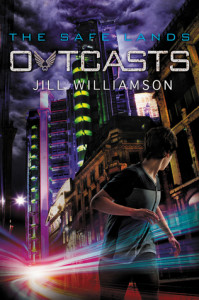 I reviewed the first book in this series, Captives, and reflected on it some more for a blog tour. It tells the story of some rustic future Colorado mountain dwellers who are kidnapped by a nearby group of people who live in what is very erroneously called the Safe Lands.

All the three brothers want to do is round up the people of their former village, Glenrock, and escape. While the previous book focused on Mason, this one centers around his brother Omar, the one who betrayed them to the Safe Landers. Now that Omar is repentant, his brothers have decided to trust him and let him join their rebel forces. Omar does his best, unless he’s distracted by the diseased pleasures offered by the Safe Lands.

In the first book, the medic Mason was able to free the Glenrock women who were being held in a prison-like harem. In this book, Mason and Levi desperately want to free the Glenrock children, held in a prison-like boarding school, so they can all go home. While he’s at it, Mason also desperately wants to find a cure for the thin plague, a sickness that dooms all the Safe Landers, including the woman Mason loves–and his brother Omar.

What I like most about Jill Williamson’s writing is her ability to write what a character is thinking and feeling. Her ability to do this is amazing. Of course, it’s got great characters and a twisty plot, so … read it!

Take a look at the nifty book trailer for Book 1:

This is part of the Christian Science Fiction/Fantasy (CSFF) Blog Tour. Please check out what others are saying about the book!